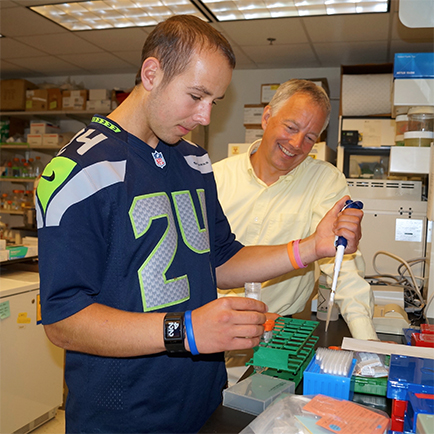 It’s not just any 18-year-old who spends part of summer vacation working in a cutting-edge brain cancer research lab at Fred Hutchinson Cancer Research Center, but Seattle Prep senior Max Hanson isn’t just any student: He has had first-hand experience with brain cancer. He’s also had first-hand experience working alongside the doctor who helped develop the treatment that saved his life.

It started in February 2004, when he was 8 years old and Hanson started getting terrible headaches. “It felt like my head was going to explode,” he said. “I’d have to sit down on the side of the playground and hold my head between my knees and close my eyes and hope relief would come.”

When the headaches persisted and his health worsened, he was sent for a CT scan. It revealed a lesion the size of a golf ball in his brain that turned out to be an aggressive form of malignant medulloblastoma. Within days, he underwent surgery at Seattle Children’s to remove the tumor, but afterward tests showed that the cancer had spread into his spinal fluid.

Fred Hutch’s Dr. Jim Olson, a pediatric brain cancer specialist, was part the team that treated Hanson when his family decided to enroll him in a clinical trial through Children’s Oncology Group at Seattle Children’s.

Olson helped develop the protocol, which involved giving a chemotherapy agent called carboplatin along with radiation. Hanson underwent six weeks of inpatient chemotherapy and radiation therapy followed by months of follow-up treatments, which were successful in putting his cancer into remission, where it has remained since.

“If Max had been born 10 years earlier, there is a good chance that he would not be here today. He is a living example of how our research is directly helping patients,” Olson said.

The surgery left Hanson with some physical challenges that affected his balance and caused weakness on the right side of his body, but through months of physical therapy he was able to regain his strength. Today his activity level is back to normal, and he even rows crew at Green Lake.

The experience with cancer contributed to Hanson’s interest in science, which he became passionate about as a sophomore in high school. He took honors chemistry as a junior and next year he’ll take advanced-placement biology. “I’ve always liked biology,” he said. “Ever since my sophomore year in high school when I took biology I couldn’t stop talking about it. I wanted to explain the process of photosynthesis to my parents. I always really liked finding out how things worked.”

In the decade since his treatment, Hanson and Olson have kept in touch, something Olson and his team make a point of doing with many patients and family members. “I keep in touch with many of the families of my patients through the years, whether the child survived or not,” Olson said. “Each year, my lab team takes a day to prepare dinner for our patient families and we gather to eat, share music, dance and catch up.”

Earlier this year, Hanson decided he wanted to gain experience in the research setting, particularly in a way that could help kids with brain cancer, so he reached out to Olson, who found him the summer job as an aide in his lab. There, Hanson has been learning the basics of lab work in the same lab that developed Tumor Paint, a molecule naturally derived from a scorpion that, once injected into the bloodstream, binds to cancer cells and lights them up so that surgeons can see the location and extent of cancer in the body. This helps ensure they don’t leave cancer behind when they operate.

“The development of these drugs could eventually help treat children with the same kind of cancers as Max had,” Olson said. “For kids with Max’s type of brain cancer, I personally hope that Tumor Paint will provide a huge advantage in two ways. First, the likelihood of survival is about 30 percent higher if most of the tumor is removed (even if a little is left behind). Second, many of the side effects are caused by the need for surgeons to split the brain wide open to see the entire tumor. I hope that they will be able to use much less invasive approaches if the tumor cells are glowing and they have proper tools to see the fluorescent glow.”

Hanson has also lent a hand in the lab’s Project Violet, a “citizen science” research project that aims to derive candidate drugs from molecules found in organisms such as in sunflowers to remedy an array of human disorders and diseases. The name of the project comes from a girl named Violet whom Olson treated for brainstem glioma. Terminally ill, Violet and her family offered to donate her brain after her death so that researchers around the world could study her cancer in an effort to prevent other children from suffering the same fate.

The project is innovatively funded by crowd sourcing, allowing individuals to adopt one of the drug candidates and follow the scientific progress. For Project Violet, Hanson did some web-based research to identify foundations or bloggers that might share the Project Violet story more widely across America. “Project Violet is really cool, what else can I say? It’s awesome,” he said.

Olson said that Hanson has been a valuable asset and great to have around.

“Max has done an excellent job as a lab aide,” Olson said. “In addition to completing the jobs that he is given, he is always asking team members, ‘What can I do to help you today?’ He is one of the most gentle, kind, thoughtful people I have ever met and it is an honor to mentor him.”

For Hanson, the future has many possibilities, including college and a potential career as a physical therapist or athletic trainer. “I always like being around physical activity,” he said.

In the more immediate future, in February he’ll mark 10 years of being in remission. “I’m going to celebrate big time,” he said.