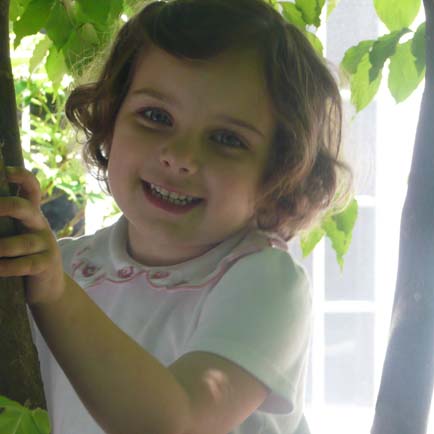 The emergency room doctor pulled Tim McKenna and his wife, Mary Ellen, into a small equipment room – a closet, really -- to give them the news.

“We were at the ER for hours while they did a CT scan, then the doctor said, ‘I need to see you in this next room,’” said Tim McKenna, a 55-year-old architect from Springfield, Mass. “That’s when she told us ‘Molly’s got a tumor.’”

Their daughter Molly, age 4 at the time, had been experiencing a handful of vague symptoms. Then one day, her mom noticed Molly’s left hand was shaking as she drank from her sippy cup. The next day, both her left arm and left foot began to drag. Her parents consulted with a pediatrician who recommended they see a neurologist. Before they could get in, though, they got a frantic phone call. Molly was having trouble walking and talking at school.

“My wife rushed her to the ER and it was the longest night of our lives,” said McKenna. “The next day we got her MRI results back. She was diagnosed with a low-grade astrocytoma.”

That began the McKennas’ battle against a deadly brain tumor that ended Molly’s life shortly before her 6th birthday, a battle that involved a crack team of doctors from Dana Farber Cancer Institute as well as pediatric brain cancer specialist and Fred Hutchinson Cancer Research Center scientist Dr. Jim Olson.

A bright and bubbly child, Molly loved her family, her friends and she especially loved playing dress-up.

“Her babysitter gave her a treasure chest with a Cinderella outfit and a Sleeping Beauty outfit and Molly would just be hanging out, then she’d walk up to her room and come down in one of her outfits,” said her dad. “It was her favorite thing. She was a funny kid that way.”

She was also a very caring child who was “always concerned about other people,” said McKenna. “She loved to share, even as a baby.”

Molly proved to be a courageous fighter, too, particularly after her doctors  diagnosed her with the inoperable, incurable but seemingly treatable brain tumor. The little girl went through weekly chemotherapy in November and December of 2009, a difficult treatment that left her exhausted but not beaten.

“She was slowing down and her left arm was numb because of the tumor, but she was always upbeat,” said McKenna. “I remember around Thanksgiving, she turned to my wife and said, ‘Mommy, want to see me try and run?’ She was fighting through stuff.”

Unfortunately, a post-chemo MRI showed that, despite treatment, the tumor had grown.

“It had exploded,” said her father. “It looked like a fried egg. They did a biopsy and it confirmed that it was not low grade, but high grade astrocytoma. That’s when I stopped doing a lot of research. I didn’t want to know any more.”

The McKennas didn’t stop fighting, though, or reaching out to specialists who might have answers. Molly continued treatment -- chemo and radiation six days a week for six weeks at Boston Children’s Hospital -- and this time, the tumor shrank by half. Encouraged, the McKennas moved their daughter back home.

“She never talked again and was pretty badly paralyzed but she was totally aware,” said her dad. “I would tell her every time I picked her up that she was the prettiest, smartest, strongest, bravest and hardest working girl in the world.”

The family spent one last summer together before Molly’s condition worsened. She died October 4, 2010, a few days after a large Mass at the family home.

“We had a local priest and about 40 or 50 people saying goodbye to her and letting her know how much she was loved,” said her dad. “She was a real fighter. Just so strong.”

Dr. Jim Olson visited Molly while in Boston and corresponded with the McKennas during her treatment and after her death. Olson has gone on to dedicate Project Violet to helping children like Molly.

“When I know a child is going to die, and the prescriptions I’m writing might make them live a couple weeks longer but aren’t going to save their lives -- there’s nothing harder than that,” Olson said. “That drives my research.”

The McKennas have nothing but praise for Dr. Olson and his innovative approach to finding cures for deadly and debilitating diseases.

“Jim has talked about how he’s doing everything he can to make sure some day he’ll be able to tell patients and parents something different,” said Tim McKenna. “A lot of people say that, but he’s walking the walk.”