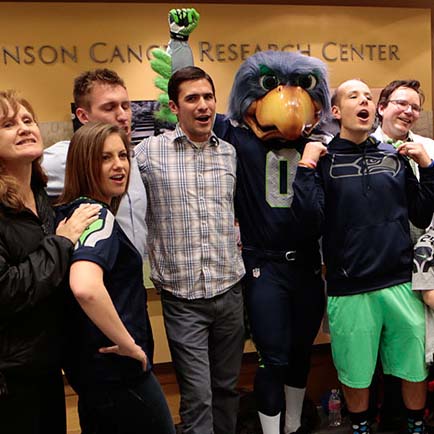 It was a meeting of the mascots.

Blitz, the Seattle Seahawks’ beloved blue and green hawk, stood in the lobby of Fred Hutchinson Cancer Research Center Friday evening with his arm slung around Max Hanson, a senior at Seattle Preparatory School. Hanson describes himself as “a big football nerd,” and represents Seattle Prep as its Panther mascot.

But this meeting wasn’t about sports – it was about bringing joy, celebration and a dash of silliness and magic in the form of a big blue bird to children with brain cancer.

Hanson is one of them. A decade ago, when he was an 8-year-old athletic boy, he suddenly developed searing headaches, which prompted his parents to take him for a CT scan. Hanson remembers watching his father pace back and forth in the hospital lobby as the family waited for the results. When they came, “the floor dropped out from under us,” remembers his mother, Erin Cordry.  Hanson had a medulloblastoma, an aggressive, cancerous brain tumor. “We tried to grasp at any hope,” Cordry says. Hanson underwent a surgery that required him to have to relearn how to walk, and began a protocol developed by Dr. Jim Olson, a researcher at the Hutch and pediatric oncologist at Seattle Children’s. “His research is what we believe saved Max’s life,” says Cordry.

Today, rather than being the sick boy he once was, Max is healthy enough to row crew – and cheer on his high school’s teams as the mascot.  He’s inspired by Blitz, who he describes as “being so cool.”

That’s exactly why, just days before the Seahawks host the San Francisco 49ers in the NFC Championship Game, Blitz took time out of his packed schedule to come to the Hutch and visit with a group of kids who’ve grappled with a stark diagnosis.

“Blitz has an approachability with kids,” says Ryan Asdourian, who calls himself Blitz’ “handler” and, some might say, knows Blitz from the inside out. “A big joy for him is to get to bring a smile to their face.”

Asdourian reached out to Olson after seeing a TEDx talk he gave about Project Violet, a “citizen-science” endeavor devoted to finding more innovative treatments for brain cancer.

“I’m always intrigued by great work. Tumor paint in particular impressed me,” he said, referring to a drug developed by Olson’s team that finds and attaches to tumor cells, illuminating them to show surgeons exactly where to cut. It’s now in trials in Australia.

Asdourian himself understands what it’s like to be given a serious diagnosis. In 2008, after he started feeling tingling sensations in his feet that he says “crawled up to his legs and stomach,” he underwent an MRI and learned he had Multiple Sclerosis. He started treatment with Rebif, a medication he injects three times a week that he says has been working. “In general my symptoms come and go,” says Asdourian, who is 32.

Olson, who himself has three family members with MS, says he’s committed to helping support better treatments for the degenerative disease. “I have no idea whether the drug candidates we are developing through Project Violet will be helpful but the strong focus on diseases of the brain makes it a possibility.”

Each year, Asdourian helps raise money for MS research through the annual Team Blitz Pub Crawl. “You never know what tomorrow will bring so it’s important to live life to the fullest,” he says. “I think that’s how I’ve approached life for as long as I can remember but a diagnosis like this is a strong reminder.” For Asdourian, that means cheering on the Seahawks – and also trying to bring a smile to the face of a child with cancer, which Blitz did during his visit to Fred Hutch.

While many of the other kids high-fived Blitz and were eager for photo, 11-year-old Joey Saleh, weary after a year that included a diagnosis of a medulloblastoma, followed by radiation and chemotherapy, sat quietly in a chair nearby. Blitz approached him and gave him a gentle hug.

After he walked away, Joey, who watches all the Seahawks games on TV, softly whispered, “That was so cool.”

That’s what it’s about, says Asdourian. “That's why Blitz does this.”